According to a newly published statistics, Huawei P9 currently topped the list as the best selling dual-camera smartphone in China for the first quarter of the year. Out of the top 10 positions for the best selling dual-camera handsets, eight of the positions was taken up by Huawei with the remaining two positions attained by Xiaomi Mi5S Plus as well as Vivo XPlay 6 which stood at seventh and ninth position respectively. 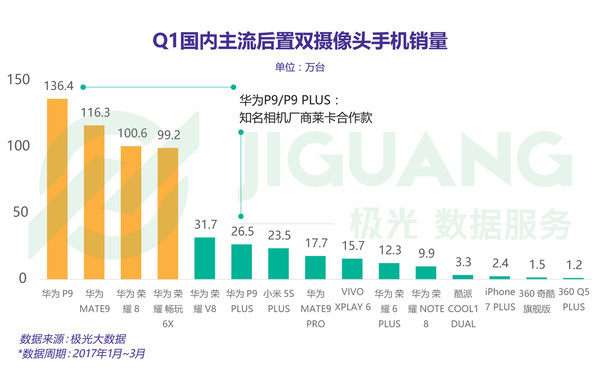 In just a short span of three month time, more than 1.36 million units of Huawei P9 had been sold in the Chinese market alone, which is followed up a total sale figure of 1.16 million units for the newly released Huawei Mate 9 which is ranked the second best selling twin camera smartphone in Q1.

On the contrary, only approximately 24,000 iPhone 7 Plus were sold during the same period of time. For the second quarter of the year, we can expect to see some changes in the ranking with Huawei P10, Xiaomi Mi6, as well as Galaxy S8 being the possible candidates for the top 10 positions.