Many may have thought Galaxy Note 8 would be the Samsung’s first handset to house twin rear cameras. However, recent rumors that the Samsung Galaxy C10 would be the first smartphone from the company to feature dual rear camera setup. A leaked shot showing the rear side of the alleged smartphone has appeared to reveal the dual camera module. 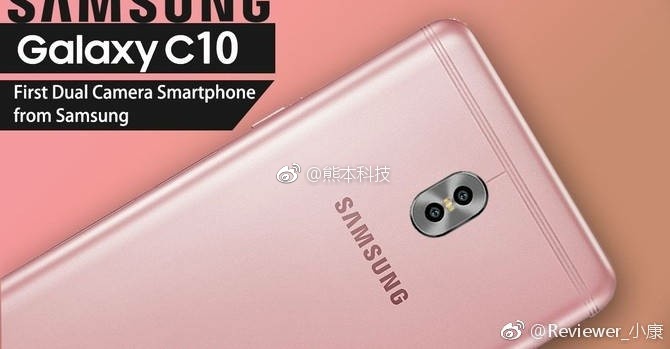 The handset shown in Rose Gold resembles to the leaked sketch of the same phone that had appeared few days ago. The two cameras have an dual_LED flash placed between them. Below the twin camera setup, there is a Samsung logo. There is no rear-mounted fingerprint scanner which indicates that it may be placed on the front side. Above the camera are the top antenna lines. The bottom part of the back panel which is not visible in the image is also expected to feature similar antenna lines.

The Snapdragon 660 chipset is expected to power the Galaxy C10 along with 6 GB RAM. Rumors are rife that the smartphone would be arriving with dedicated button for Bixby AI voice assistant. Speculations are rife that there would another variant of the phone called Galaxy C10 Plus.