Yesterday, a new Samsung phone with model number SM-G8850 was spotted on TENAA. Even though the rumor mill is speculating that it could be the Galaxy S9 Mini, ther is no official confirmation on it. The same model number has now appeared on AnTuTu to reveal some information on its specifications. 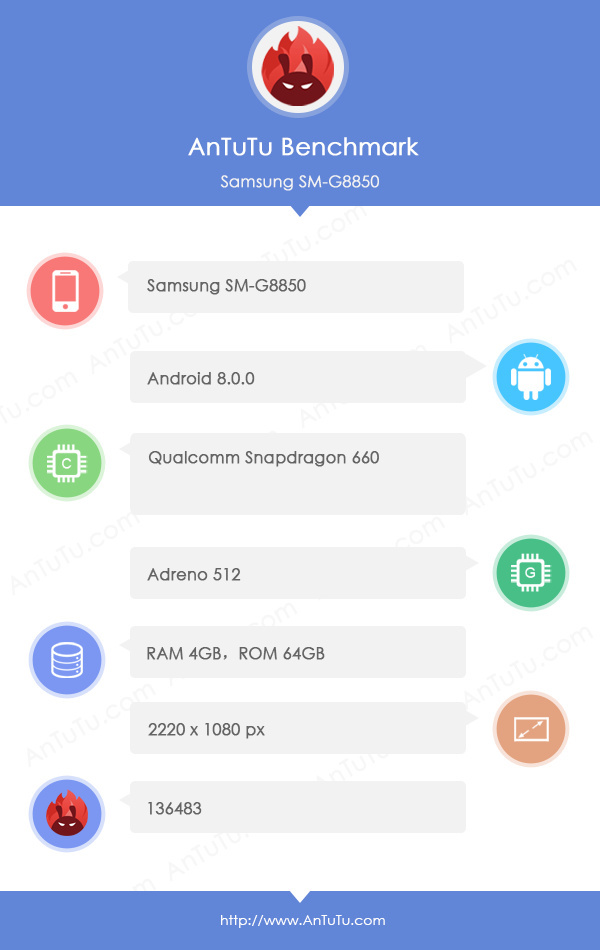 According to the AnTuTu listing, the Samsung SM-G8850 is fueled by the Snapdragon 660 chipset. Interestingly, the SM-G8750 phone phone that was found listed at Geekbench at the beginning of this month was also driven by the same SoC along with 4 GB of RAM.

Its screen offers resolution of 2220 x 1080 pixels which indicates that it is the default resolution of the phone and it also reveals that it will be arriving with an Infinity Display. The SoC is supported by 4 GB of RAM and 64 GB of native storage. The device is running on Android 8.0 Oreo. It has recorded an average AnTuTu benchmarking score of 136,483

If it is the Galaxy S9 Mini, it could be also made available outside of China along with an Exynos chipset. The other specs revealed through its TENAA listing include 5.8-inch QHD+ S-AMOLED display, 6 GB RAM variant,  dual 12-megapixel cameras, 8-megapixel selfie camera, and 3,000mAH battery.

Huawei Is Working On A Foldable Phone – May Launch Soon