Most flagship smartphones that have been unveiled so far such as Sony Xperia Z5 Premium, Galaxy S8 and Galaxy S8+, and Xiaomi Mi 6 are powered by Snapdragon 835. The SD 835 is currently the most powerful chipset for mobile devices. However, the company also a powerful chipset for midrange and upper-midrange phones under the wraps. Qualcomm has confirmed that it will officially unveiling the Snapdragon 660 chipset on May 9 through a media event at Beijing. It has started sending launch invitations. Here is the invitation in Chinese language. 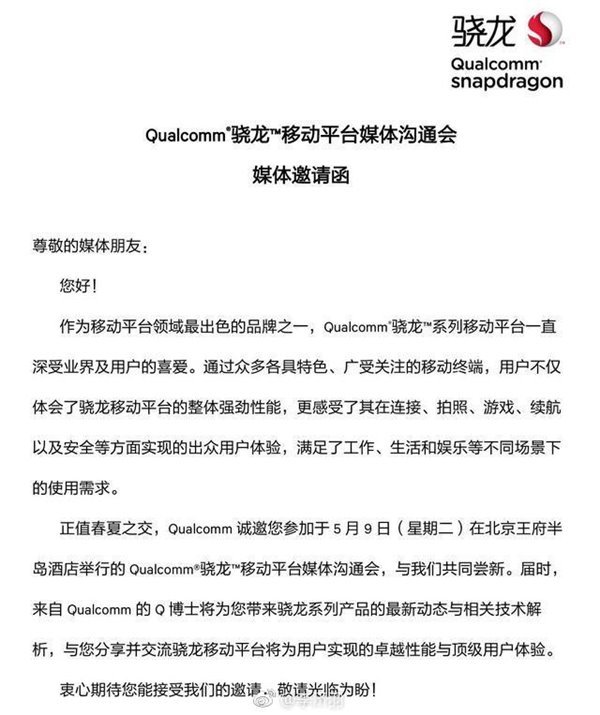 The Snapdragon 660 is a 14nm chipset that features X10 LTE modem and support for Quick Charge 4.0. Speculations suggest that if features two Kyro cores with quad cores of Cortex A73 processors gunning at 2.3 GHz and the quad cores of Cortex A53 processors running at 1.9 GHz. The chipset also includes Adreno 512 graphics. It offers two channels for LPDDR4X 1866 MHz RAM and also supports UFS 2.1 flash memory.

There are several smartphones that are rumored to feature this new chipset. Some of them include the first dual camera Samsung C series phone, Xiaomi Redmi Pro 2, Mi Max 2, Oppo R11, Vivo X9s Plus and Nokia 7/8.