Sony is rumored to be working on G8341 and G8441 smartphones. Speculations are rife that these smartphones will be respectively launching as Sony Xperia XZ1 and Xperia XZ1 Compact. The G8341 has appeared on Geekbench benchmarking platform. 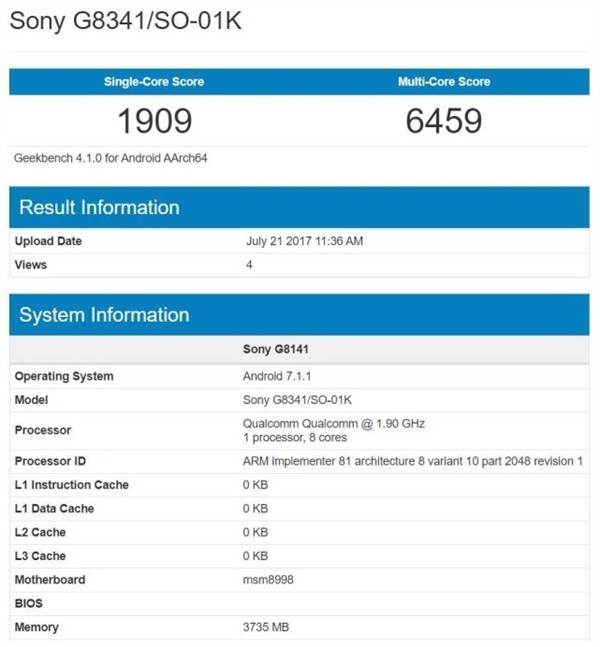 According to the above Geekbench listing, the Sony G8341 is powered by Snapdragon 835 chipset and 4 GB of RAM. It is running on Android 7.1.1 Nougat. It has scored 1909 and 6459 respectively on single-core and multi-core tests on Geekbench. Earlier rumors have revealed that Xperia XZ1 would be featuring 5.2-inch FHD display and 3,000mAh battery.

Since the alleged Xperia XZ1 Compact (G8441) was spotted with Android 8.0, it is likely that the Xperia XZ1 Compact would be preloaded with Android 8.0 even though it is listed Nougat OS on Geekbench. A Polish retailer had listed the unannounced G8341 and G8441 phones earlier this month, it revealed that the G8341 would be costing €750 (~$880) at launch and it would be coming in colors like Black, Moonlite Blue, Venus Pink, and Warm Silver.

Sony has confirmed that it will be holding its pre-IFA 2017 launch event on Aug. 31. Rumors have it that it will be unveiling the Xperia XZ1, Xperia XZ1 Compact as well as the rumored Snapdragon 660 powered Xperia X1.

iPhone 8 May Not Feature a Fingerprint Reader, Releasing in October or Early November