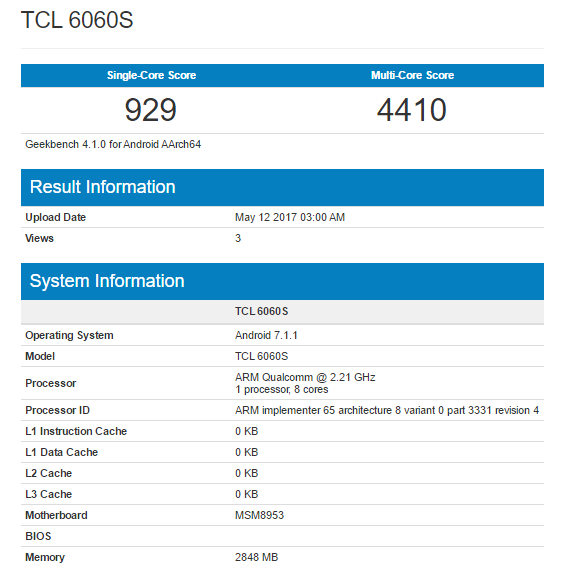 The Geekbench listing has revealed that the Alcatel Idol 5 is running Android 7.1.1 Nougat OS. It is driven by Qualcomm MSM8953 chipset which is the Snapdragon 625 that features a 2.21 GHz octa-core processor. The SoC is supported by 3 GB of RAM. In single-core test, the Idol 5 has score 929 and in multi-core test it has scored 4410. Here are the previous Geekbench benchmarks of the Idol 5:

A MediaTek edition of Alcatel Idol 5 has been also spotted recently on GFXBench and Geekbench. Its specs include 5.5-inch FHD screen, MediaTek 6757CH SoC, Mali-T880 graphics, 2/3 GB RAM, 32 GB storage, 12-megapixel rear camera, 8-megapixel front camera and Android 7.1.1 Nougat. Speculations have it that the Snapdragon edition will be aimed towards the states whereas the MediaTek variant will be coming to Asian markets.