Gionee M7 will be showcasing 8 bezel-less smartphones on Nov. 26. The Gionee M7 that was announced in September will also be present at the upcoming unveil event that will be held in Beijing, China. Through the official Weibo account, Gionee has revealed that it will announcing new color variants for the Gionee M7.

The Gionee M7 is already available in colors like Sapphire Blue, Star Blue, Champagne Gold, and Black. However, an official poster of the Gionee M7 that has been added to the company’s Weibo account shows that it will be coming new colors like Maple Leaf Red and Amber Gold. There is no confirmation on whether these color variants will be available outside of China. 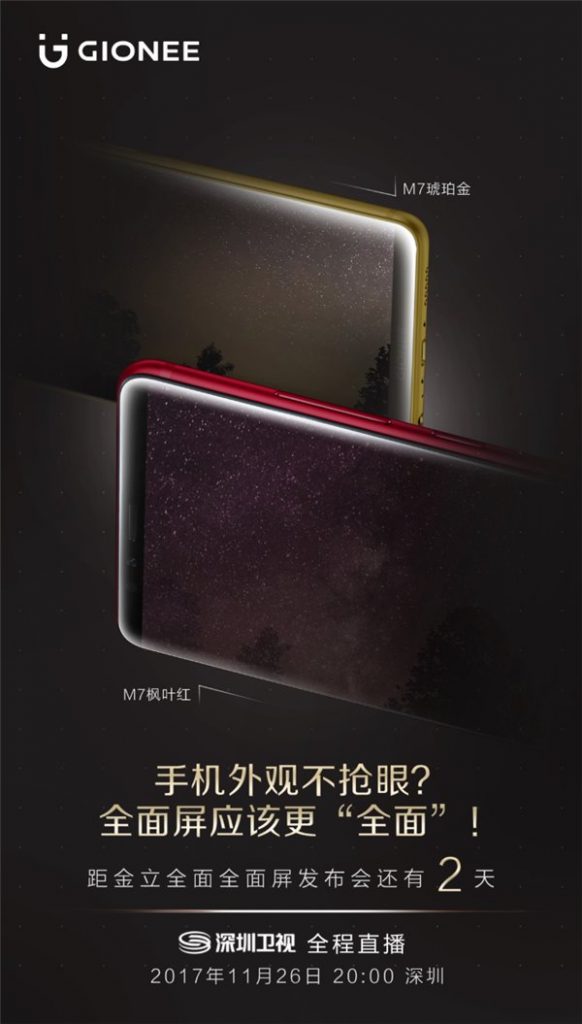 The Gionee M7 is the first full screen smartphone from the company. It is powered by MediaTek Helio P30 chipset and 6 GB of RAM. It houses a 6.01-inch FullView display that produces FHD+ resolution and 18:9 aspect ratio. The back panel of the handset features 16-megapixel + 8-megapixel dual cameras. It has an 8-megapixel selfie snapper and 4,000mAh battery.

One of the recent posters from Gionee has already confirmed the names of some of the phones that will be introduced on Nov. 26. The Chinese firm is expected to unveil other full screen phones such as Gionee M7 Plus, S11, S11s, F6, F205 and more.