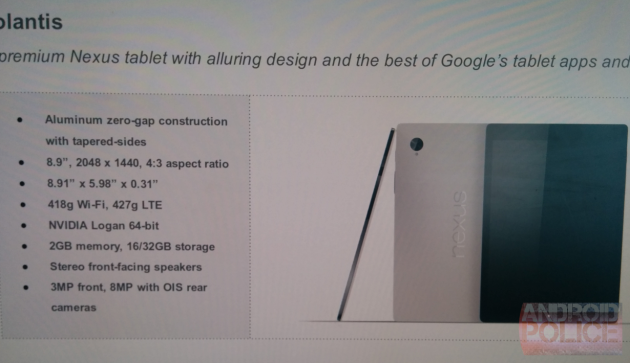 Apparently Android Police has managed to obtain some information of the upcoming Nexus tablet currently dubbed as the Nexus Volantis. This device will come with a 8.9-inch display which boast a 2048 x 1440 pixels resolution. Looking at its screen size, its hard to determine if this is actually the rumored Nexus 8 tablet or another Nexus 9 tablet which Google has discreetly been planning to release.

According to reports, the upcoming Nexus tablet will be manufactured by HTC this time round. If the above leaked document is real, then this tablet will be running on a NVIDIA Logan chipset along with 2GB RAM. It will also be equipped with a 8MP shooter at the back as well as a 3MP camera at the front.

Like any other HTC devices, this tablet will also come with an aluminum zera-gap construction chassis. Although it is stated that there will be a stereo front-facing speaker, but it isn’t really obvious from the image above.

From what we know, the 16GB version will retail for just $399 and the 32GB version at $499 – slightly more expensive than the Nexus 7. We’re not sure when this tablet will be announced but it’ll not be during the Google I/O event held this month.

Is the upcoming Verizon’s LG G Vista the G3 flagship?