The LG V series smartphones usually launch in October after the launch of Galaxy Note series phones from Samsung in August. This has been happening since 2015. However, in this year LG is now rumored to adopt a different strategy. A South Korean publication had recently reported that the LG V30 would be getting as earlier launch this year as it pegged to debut in August. A well-known Chinese leakster has spilled information on the key specs of LG V30. He even claims that the LG V30 will be launching in August. 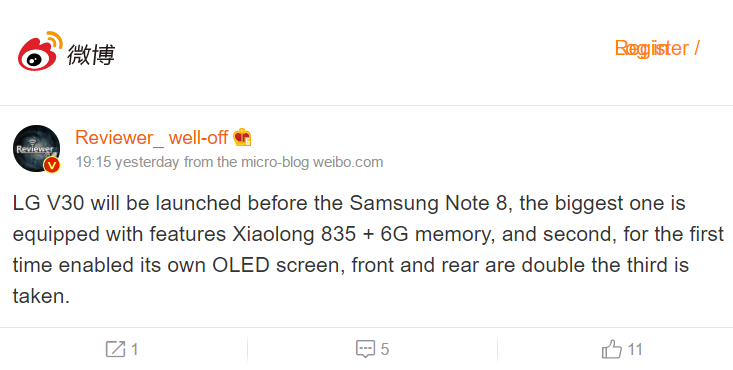 The Galaxy Note 8 is rumored to launch on Aug. 26 in New York. Since the LG V30 is speculated to break cover in August. It is likely that the LG’s upcoming flagship phablet would be unveiling in early August.

The Snapdragon 835 chipset and 6 GB RAM are expected to power the LG V30. The Samsung Galaxy Note 8 is heavily pegged to come with dual cameras on its rear side. It seems that LG V30 will be entering fierce battle with the Note 8 as the tipster claims that it will be coming with dual rear cameras on its front and rear sides.

OnePlus 5 Pricing, Release Date, Availability and How to Pre-order it