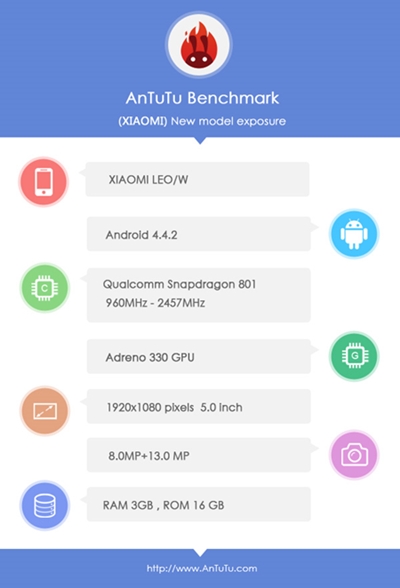 Today, a new device dubbed as the Xiaomi Leo has been spotted in AnTuTu Benchmark which raised the suspicion of many Android enthusiast out there. Looking at its spec sheet, the Xiaomi Leo is no doubt another premium flagship from the Chinese manufacturer which according to rumors will be the upcoming Xiaomi Mi3S.

The Xiaomi Mi3 was announced back in September last year, so it wouldn’t be a surprise if the company decided to release a revamped version of that smartphone. If the Xiaomi Leo is indeed the upcoming Xiaomi Mi3S flagship, then it’ll tally with what rumors have been suggesting – that the Mi3S will be powered by a Snapdragon 801 chipset with 3GB RAM.

Currently, this unannounced smartphone has an impressive benchmark score of 31,432 points which is only a few points less than the OnePlus One flagship. That being said, we can definitely expect the Xiaomi Leo to be a hardcore rival of the OnePlus One smartphone after it has been announced.

Imgaes of the Samsung Galaxy F appears once again

How to root Blu Life One X using Framaroot