Samsung Galaxy A7 (2018) had appeared on GFXBench around three months ago with a model number of SM-A730x. Now, the Samsung SM-A730F smartphone has appeared on Geekbench benchmarking site to reveal its key specs. 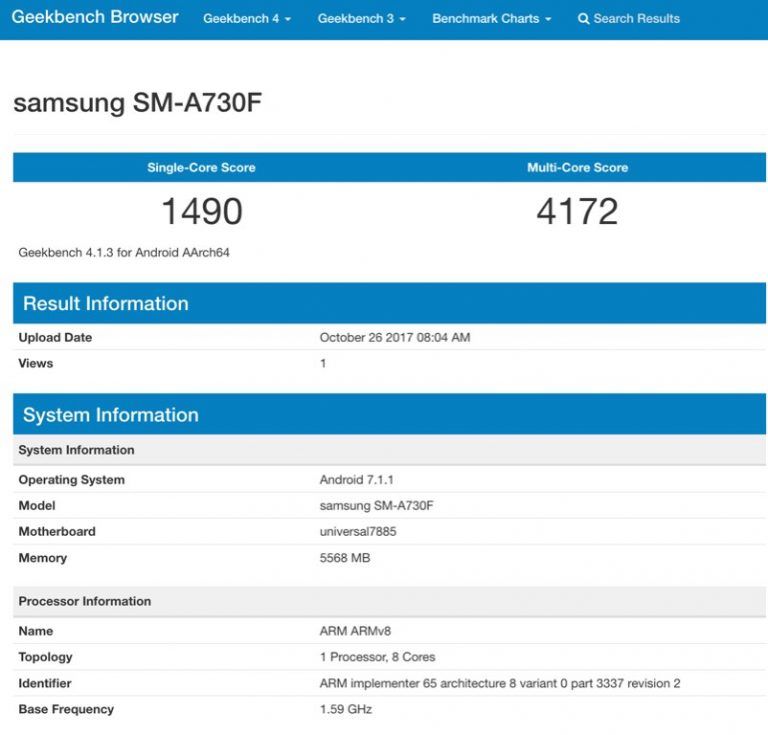 According to Geekbench listing, the SM-A730F is running on Android 7.1.1 Nougat OS and is fueled by Exynos 7885 chipset that includes an octa-core processor that clocks at 1.59 GHz. The SoC is coupled with 6 GB of RAM. On single-core test, it has scored 1490 points and multi-core test, it has scored 4172 points. The Exynos 7885 is a new 14nm octa-core chipset that includes two cores of Cortex A73 and six cores of Cortex A53 along with Mali-G71 graphics.

The GFXBench listing of the smartphone had revealed that it carries support for full HD resolution. However, recent reports have revealed that it will be offering an aspect ratio of 18:9 as it is expected to sport an Infinity Display design that is available on the Galaxy S8 and Galaxy S8 duo. On GFXBench, the smartphone was spotted with 4 GB of RAM and an internal storage of 32 GB. Hence, its 6 GB RAM variant may feature 64 GB of storage. For photography, it may include a 16-megapixel rear camera and a 16-megapixel selfie camera.

Xiaomi Launching Brand New Selfie Phone on November 2, Could it be Mi Note 3?