On December 21st, Lenovo Mobile officially announced that Lenovo Z5s custom version has commenced pre-orders for a 1998 yuan ($290) price tag, but at the same time the company also found that some abnormal users over-stocked and resold at high prices. In order to eliminate such behaviors that disrupt the market and hinder the normal purchase for fans, the company decided to temporarily close the official website purchase channel, screen all orders one by one, and release the illegal orders (this will not affect the effective orders). 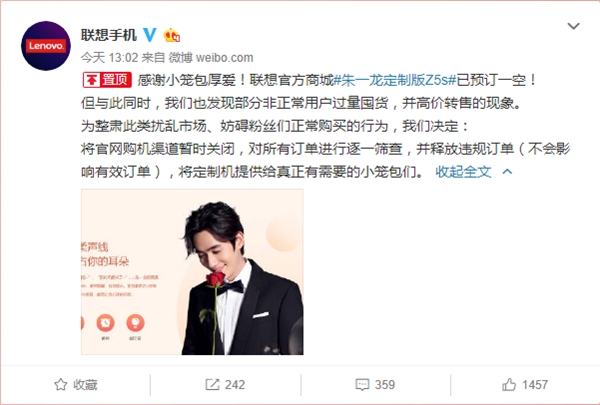 Lenovo Z5s custom version is based on honey love orange with exclusive Zhu Yilong cold light signature on the back. Its boot animation, built-in video, ringtones, alarm reminders, wallpapers, etc. are all customized. Looking at the core configuration of this smartphone, the Lenovo Z5s uses a 6.3-inch waterdrop screen, the screen accounted for 92.6%. It is powered by the Snapdragon 710 AIE Turbo processor which is equipped with a Game Turbo engine. In the camera department, this smartphone comes with a triple 16MP+8MP+5MP cameras with a F/1.8 large aperture. Its lights are kept on by a 3300mAh battery which supports 18W safe fast charge and it also supports high-precision gyroscopes and multi-dimensional network acceleration.

The pre-orders of this smartphone started on the day of its release and was closed today because of the irregularities. This custom version comes with a 1998 Yuan ($290) price tag and there are only 4,160 units worldwide.