Couple of weeks ago, the Motorola Moto E4 was spotted receiving FCC certification. Now, the smartphone has appeared on Geekbench which indicates that the company may be possibly testing the waters before officially unveiling the Moto E4. 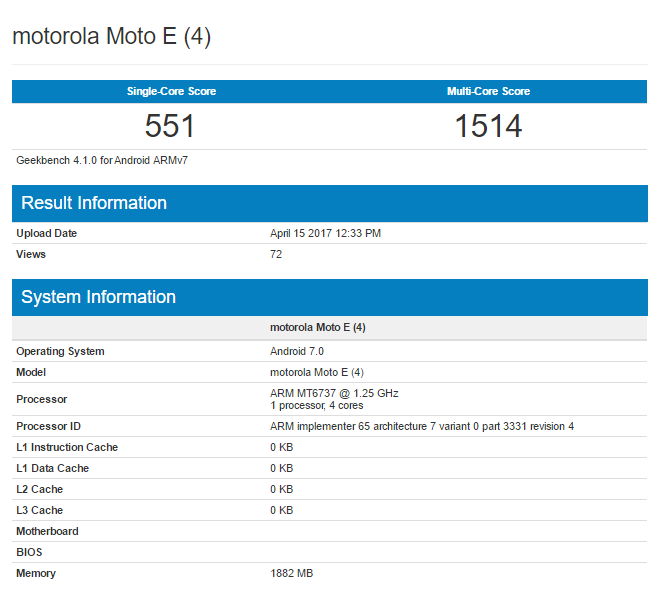 According to Geekbench listing, the Moto E4 is running on Android 7.0 Nougat OS. It is powered by MediaTek MT6737 chipset that includes a quad-core processor working at 1.25 GHz. The SoC is coupled with 2 GB of RAM. In one of the recent leaks, the Moto E4 was speculated to come with 4 GB of RAM. However, since it supposed to launch as a low budget device, it is unlikely to feature 4 GB of RAM.  On single-core test on Geekbench, the Moto E4 has recorded a score of 551 and on multi-core test, it scored 1,514.

Speculations have it that the phone would be featuring a 5-inch screen that will support a resolution of 854 x 480 pixels. For photography, it is expected to feature 5-megapixel rear camera and a 2-megapixel front camera. It is expected to include a 2,800 mAh battery. The Moto E4 Plus is rumored to house a 5,000 mAh battery. The rumor mill has also revealed its leaked renders in the previous week.