Earlier this evening, Nubia Mobile indirectly teases the upcoming Nubia smartphone to be a “true bezel-less” handset by protesting against the likes of Mi Mix 2 and Vivo X20 from calling themselves bezel-less. Aside from that, Nubia Mobile general manager Ni Fei was also spotted making a Weibo post via a full screen Nubia Z17s smartphone according to the description provided by Weibo. With that in mind, we can be pretty certain that the “true bezel-less” handset that the company is pointing to is none other than the Z17s itself. 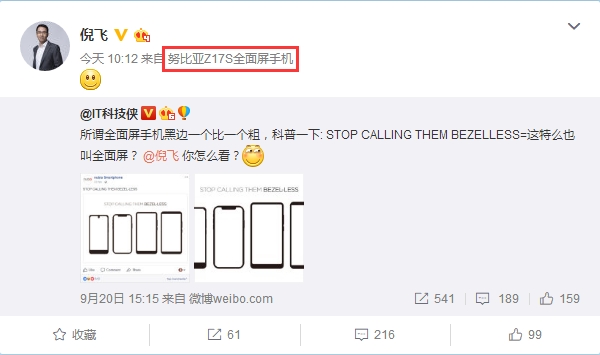 However if you take a quick glance on the official images listed on the site, it is pretty obvious that the NX589J isn’t even close to being a bezel-less unit so it could possibly be just another watered-down variant of the Nubia Z17s – perhaps the Z17s Mini if it actually belongs to the Z17s family.