Recently, we just reported that the upcoming Xiaomi Mi 5S has been certified by Chinese 3C regulatory authority and today, the device was caught up at AnTuTu as well. Surely, some of its key specs were revealed via the listing as well and most importantly, it has reaffirmed previous rumors that the Xiaomi Mi 5S will indeed features the latest Snapdragon 821 SoC under the hood.

Display-wise, the device is listed with a 1920 x 1080 resolution probably with a 5.15″ display size according to rumors. Similarly, the device will be running on Android 6.0.1 Marshmallow out of the box. 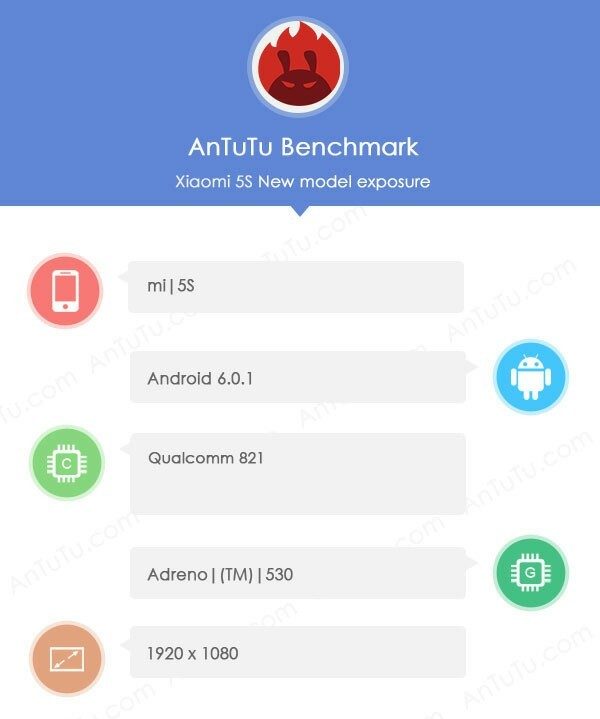 An alleged leaked teaser of the Mi 5S back in July this year, also suggested that the device may be coming with a 3D curved display, embodying a ceramic-made body similar to the Mi 5. Of course, we shouldn’t wipe off the possibility of having an ultrasonic fingerprint sensor on the device as well. Other alleged specs also include a massive 6GB RAM, 256GB internal storage, 16 megapixel main snapper at the back which is paired with a 13 megapixel front-facing camera for selfie purposes.

Without a doubt, the Mi 5S is expected to score big in the smartphone market after its release.

While Xiaomi has yet to reveal any news on when the device is slated to be released, reports out of China claimed that the device will only be announced earliest next month, after the company unveiled the upcoming Mi Note 2 later this month.